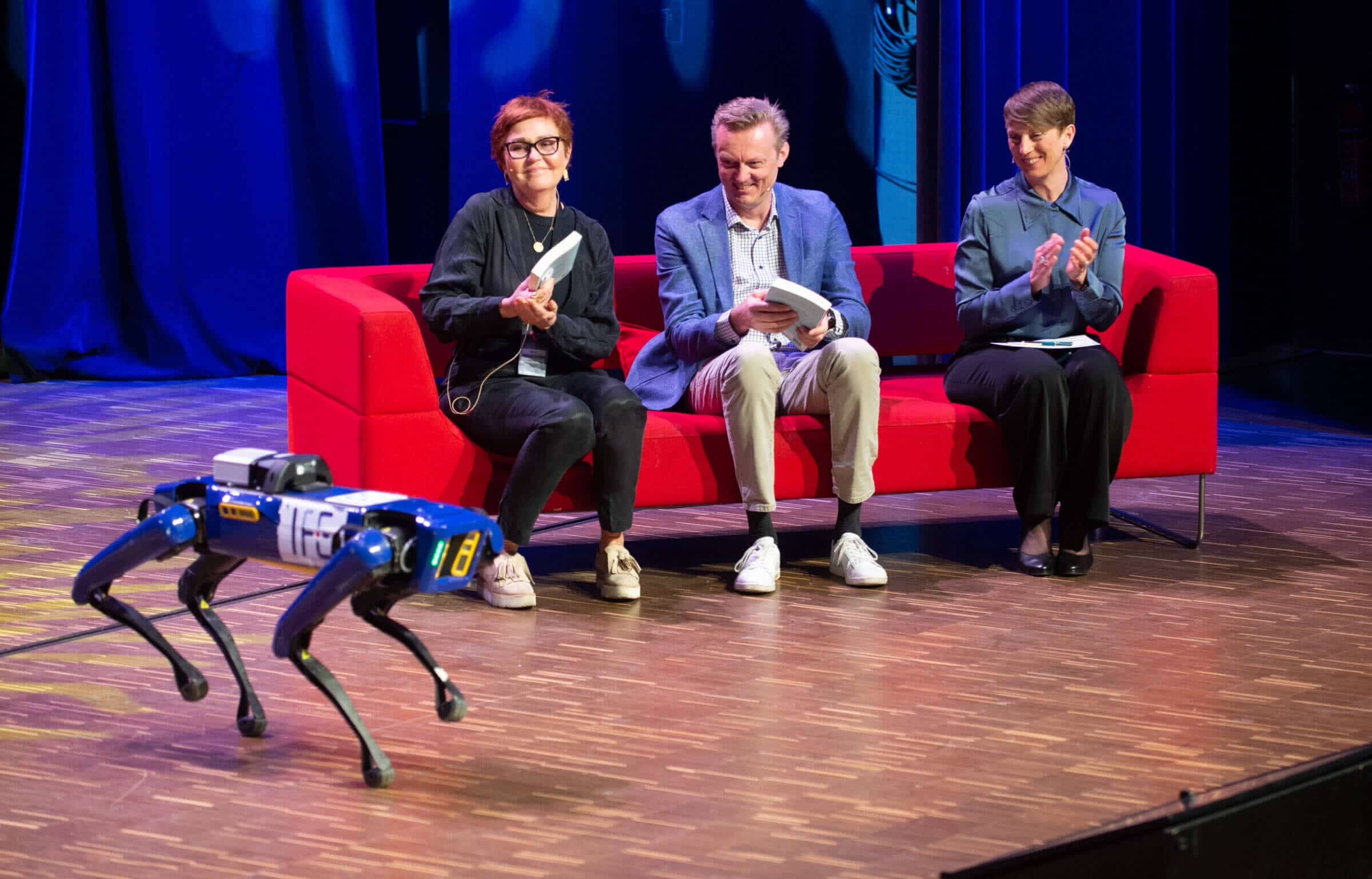 A special guest visited the opening day of AI+ 2022

When walking across the stage, robot dog Spot showed artificial intelligence in practice and made everyone in Brygga kultursal stretch their necks as he entered the spotlight at the AI+ conference.

Sitting together with the AI+ 2022 hostess Ruth Astrid Sæther on the stage sofa, Nils-Ola Widme from Abelia and Annita Fjuk from Digital Norway which were the speakers to enter the podium after the opening speech held by Prime Minister Jonas Gahr Støre, were informed that they would receive a special gift from an even more special gift presenter.

From the side of the stage, a blue robot dog entered the spotlight carrying two books on his back. As this is not an everyday sight even for AI enthusiasts, the four-legged robot got everyone’s attention while crossing the scene towards the three people on the sofa.

The robot dog is developed by Boston Dynamics and Spot is a platform which Institute of Energy Technology (IFE) uses in research projects. IFE is also one of the initiators to the AI+ conference together with Smart Innovation Norway, eSmart Systems, Halden kommune and Cluster for Applied AI.

This year’s conference is the third in a row, but it is the first full scale hybrid version with live audience. Halden is of course the place with Brygga kultursal as the conference venue surrounded by the historical city square and the harbor and protected by the Fredriksten fortress on top of the hill southeast of the city center.

A pre-opening of the conference took place on Monday with the social event AI & Beer where associated professor at Østfold University College, Henrik Skaug Sætra, talked about AI for the Sustainable Development Goals.

The historical soldiers were a nice contrast to the subject of the two-day AI+ conference – the modern and rapidly growing technology of applied artificial intelligence.

SEE MORE PICTURES FROM THE FIRST DAY AT THE CONFERENCE!

After a cultural kick off with the percussionist Aleksander Kostopoulos who gave the audience a really wakening performance both visually and audially, the Mayor of Halden Anne-Kari Holm wished everyone a warm welcome to the town, and the Norwegian Prime Minister Jonas Gahr Støre held the opening speech digitally.

Støre spoke warmly about the national AI network and the importance of Norway keeping track of the AI development.

From speeches to dinner

At lunch, the participants had a short walk through the southern part of the town to eat in Haldens Klub, Norway’s oldest eatery of their kind established in October 1786.

The second part of day 1 began with a second performance by percussionist Aleksander Kostopoulos, and 4,5 hours later, when host Ruth Astrid Sæther wrapped the day up and wished everyone a nice evening, members from Fredrikshald Borgervæpning were ready to give a historical guided tour through the city center.

During the afternoon, the conference venue got rearranged turned into a fantastic dining area with great decorations. The first day of AI+ 2022 ended with a pre-drink, a three-course dinner, speeches, and entertainment.

The AI film “Ex Machina” was shown at the Halden cinema theatre after an initiative taken by AI+.

Over 200 people attended the first day physically and about 200 people followed the conference digitally.